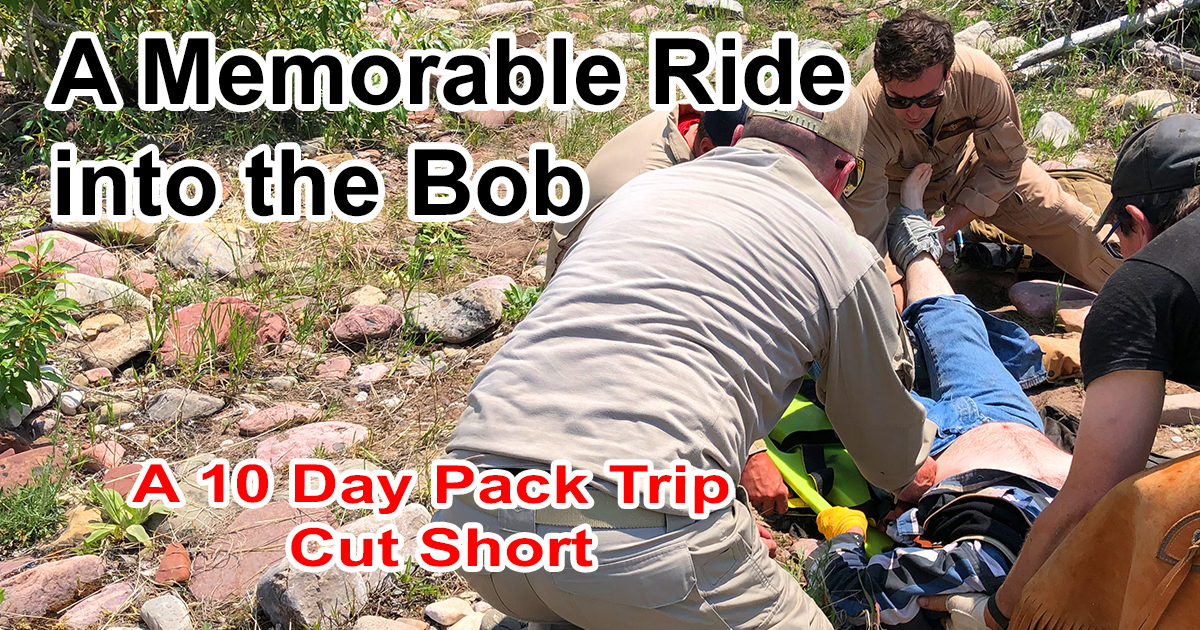 Outside an emergency room entrance, a strange town stretching ahead. Wobbling: unsteady on new crutches, a hospital issue suit of sweatpants and t-shirt was completed with a single anti-slip sock. A flimsy plastic bag held all my belongings; a vial of narcotics and $150 in cash. No wallet, no ID, and no phone. It was not a good way to end a day. 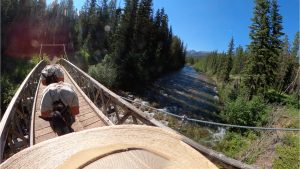 The Continental Divide Trail ranged ahead towards its terminus in Canada. Closer was the famed Chinese Wall in Montana’s Bob Marshall Wilderness Complex. Closer yet was our lunch destination in the aptly named Pretty Prairie. In one of the nation’s most scenic areas, I was annoyed.  This was supposed to be day 2 of a 10-day pack trip through the Bob and we hadn’t yet decamped from the trailhead.  I had been planning this trip for months and wanted to get going, instead we were going on a day ride to a location I’d visited dozens of times before.

The South Fork of the Sun River sparkled in front of us as it raced to the Gulf of Mexico over 1,000 miles away via the Missouri and Mississippi Rivers. We would cross the Sun twice before we made it to our luncheon spot near the Pretty Prairie patrol cabin overlooking a glade in the forest.

Preparing for a pack trip is an involved process that becomes more so the longer the trip and the greater number of people coming along. The basics of food, water, and shelter are the same regardless of the where’s, and when’s of any camping trip. Complications grow with the number of people and animals that accompany you and the number of days you’ll be out. Our group of 4 humans and 8 mules and horses, included my wife: Celeste, and Joe and Jenny, dear friends of ours from our local mule club. This was the first Bob trip for my 3 companions, and I wanted it to be special. As it turned out it was certainly memorable for all involved.

This early season trip was one of my few recreational runs into the 1.5 million acre expanse of the Bob Marshall. Most of my visits to this spectacular country had previously involved hauling tools and materials for backcountry work parties, not the lounging and loafing that I was looking forward to on this adventure. 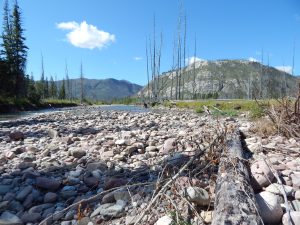 Below me, barely reaching Ruger’s knees the river rushed over polished stones of green, gray, red, and black. Each rock telling a story of time and geology before forming the shifting and slippery riverbed below Ruger’s shoes. Having passed through this ford many times over the years I knew that if the river was knee high just 10 feet from the bank it would be belly deep by midstream and that would mean my short statured pack animals might have to swim if we continued. Caution being the better part of valor; I decided that this side of the Sun would make for a fine, and much drier, lunch spot with acres of ample grazing for the mules. With the pack string in tow we turned into the current, facing upstream to exit the river and make our way on to lunch.

It may be cliché but time moved slowly as Ruger first shifted his weight as he attempted to navigate the smooth unstable stones under the surface. He then dropped onto his side, my leg trapped under his bulk as I sat on the riverbed, water up to my chest. Once the current caught his mass the big red mule rolled over me, forcing me under water as we spun over one another on our way downstream. My much better half Celeste had a ringside seat for the show as Ruger and I tumbled in the swift river. Things had suddenly become sporty.

By the time I lunged and heaved out of the river like a half-drowned rat, Celeste and Joe were already at the bank and helped reunite me with dry land. Other than coughing up quite a bit of the frigid river water I thought all was well if a bit wet. Then I tried to stand up. Ruger fared much better than I. He clambered ashore wet but otherwise unharmed save for a few bumps and scrapes.

Thank Heavens for trained medical personnel. When not on the trail and spreading the good news of mules across the Pacific Northwest, Jenny is a nurse and immediately went to work assessing what impacts my unplanned mule rafting journey had wrought. Celeste and I both keep current with our 1st Aid and CPR certifications but having a professional on hand made things a lot less frightening.

It was quickly determined that riding out was not going to be the best option. It was time to call for help.

Satellite messengers are game changers, and we don’t go off grid without one. Most of the time they’re simply a reliable tool for communicating with family and friends when cell coverage is a dream. It’s during exciting times that the utility of these handheld devices really comes home. For the past several years I’ve carried the SatPaq device which uses a cell phone as the interface and display. With extremely low latency and high reliability the SatPaq has always handled all my needs. Until the phone broke.

The downfall of keeping the 10 essentials on your person is that if you have a wreck there’s a chance that your emergency tools can be damaged. Despite a strong protective case the water pouring from the insides of the battered phone told a tale of irreparable damage. The SatPaq wasn’t coming to the rescue today.

The space shuttle had redundant systems and so should you. We always carry backups for critical systems including communications. Celeste carries a Personal Locator Beacon from ACR on our rides. A PLB may not be able to send non-emergency messages, but it also has no subscription fees. We’ve carried the PLB for years without having to utilize it. Now was the time to put our “when the stuff hits the fan” tool to use. 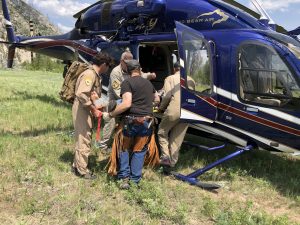 Once the PLB was activated the only thing left was to wait for the signal to make its way from space to a US Air Force command center in Florida, then on to the Helena, MT Sheriff’s Office, where aviation support from Two Bear Air was arranged.  Once the helicopter rotors were spinning it was a 52-minute flight from Kalispell, MT to my location at the confluence of the south and west forks of the Sun River, within the Bob Marshall wilderness complex. In only three hours word of my wreck had traveled thousands of miles and coast to coast and back and returned to my riverbank in the form of two paramedics and pilot traveling in a shiny blue helicopter. A PLB works. 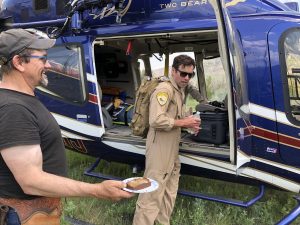 Snacks are always welcome.  Especially in an emergency. Not only did the gleaming Bell helicopter arrive with two paramedics ready to work on their patient, but the pilot also brought freshly baked banana bread that he shared with my companions as the paramedics readied me for transport.

The twin engines of a Bell Globalranger create over 1,100 horsepower and the pilot whipped each horse as he sped to Helena 80 air miles, and many mountain ridges, away. My journey from a dusty riverbank to a spotless ER took only 34 minutes. Celeste’s trip out of the Bob was going to take much longer as she singlehandedly led a string of 3 mules and a horse back to the trailhead miles away.

ER staff determined that I had neatly relocated part of my lower leg bone, specifically the medial malleolus. For layman, this is the projection on the inner side of your ankle joint. Find it then imagine the bump moved to a brand-new location. Injuries like these hurt like heck but they’re a long way from the heart.  Once the Docs had my injuries stabilized it was time to turn me loose on the town of Helena. This is where the day continued its interesting turns.

My wallet, with ID, credit cards, and cash, jumped ship at some point during my river excursion.  Although the ER staff had arranged overnight accommodations my lack of ID proved troublesome. After multiple phone calls back to the hospital the hotel agreed to let me into a room. It would be a long night waiting for transportation to get me home.

And that my friends is the story of my 2021 pack trip into the Bob. I go through a post trip debrief after every ride to see how we can improve our future trips. There’s been a lot of discussion regarding this adventure. I don’t know what we could have done differently. We didn’t take untoward risks. Indeed, the accident happened as I was avoiding a potentially dangerous situation. We were prepared and equipped for emergencies and our system redundancy plans worked well.  Sometimes accidents happen and I feel that this was one of those times. Celeste and I are both looking forward to revisiting the Bob together next year and finishing this 100 mile loop.