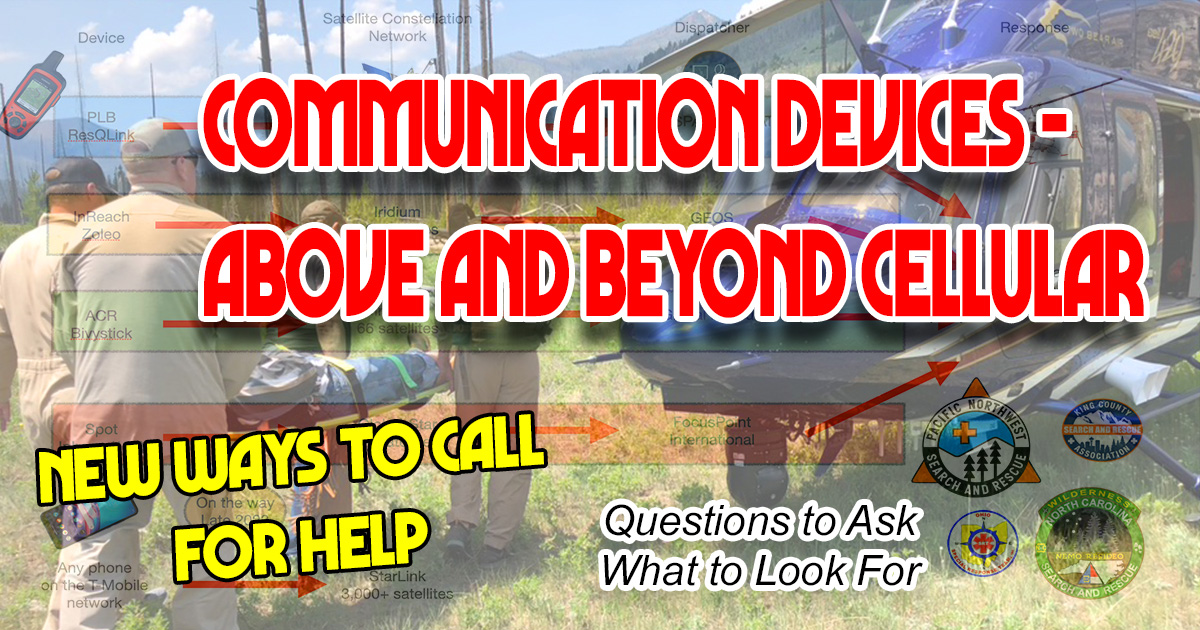 Communication Devices are going Above and Beyond Cellular

There are new communications devices on the market, and more are on the way. Last year Apple introduced a new feature for their latest line of cell phones – emergency SOS via satellite. T-Mobile and SpaceX plan to allow existing cell phones to use orbiting satellites for text messages. The coming year may prove to be quite exciting in terms of backcountry communications.

You’ve heard of InReach, Spot, and other communicators that are stand-alone or pair with your phone to communicate through a satellite when there’s no cell phone coverage. Now, you can forego those extra gadgets and have a phone that can do much more than your old phone.

With nearly 20% of the U.S. and virtually all of the remote areas where we ride and camp unreachable by traditional cellular networks, expanded communication offerings are a game changer when it comes to staying in touch.

Far above the Earth, zipping by at 16,000 miles per hour, are thousands of communication satellites. More are being launched daily. Mostly, they’re too distant to be seen unless you’re in a very remote area on a very dark night when you can spot brief flashes as the satellites blaze across the night sky. Although they’re mostly out of sight, these technological marvels could be vital for getting you help when you (or someone you love) are stranded, injured, and out of cell service range. You can connect to these satellites to contact an emergency dispatcher when you can’t make a phone call.

Until the past few years, only professionals owned or used satellite communication devices. Most casual trail riders and horse campers didn’t have the budget or expertise to use an expensive device with a hard-to-read LCD that displayed a plethora of obscure data UTM, GMRS? What? When we left the security of the cellular grid, we relied on maps, memory, and crossed fingers. All that has changed with recent crops of more affordable and easier to use, satellite messengers and now regular cell phones.

Of course, nothing is easy, and with satellite messaging, the alphabet soup that describes it can be confusing. Making matters worse is that despite the many makes and models of devices available, there’s a fair bit of overlap in the services they operate on. This diagram should help with that.

As you can see, during an emergency in a remote area, any of these devices will connect you with emergency services personnel to get you help. The routes they go through to get you that assistance varies. From government-funded groups to private enterprises, the SOS message will most likely go through. As an end user of these devices, you’ll have to decide what works best for you and your unique needs.

The device that worked for me when I rolled down a river while attached to an also tumbling mule was a PLB. A PLB, or Personal Locator Beacon, is a uni-tasker that does one thing exceedingly well. It uses the government-funded Cospas-Sarsat system to send your distress signal to a national mission control center whose military personnel then contact local law enforcement or Search and Rescue services nearest you to organize a rescue.

How that worked in my case:

Once I reached the shore and determined that I wouldn’t be riding out, the PLB was activated. Then the waiting started. With a PLB, there is no confirmation that the message was sent or received, making the wait seem much longer. The distress message was relayed through a network of 92 orbiting satellites to the Airmen staffing the U.S. Mission Control Center in Florida. These U.S. service men and women confirmed the distress message was authentic. They then contacted the Helena Co, Montana Sheriff’s Department. The Sheriff in turn directed 2 Bear Air to start spinning helicopter rotors. All this happened in minutes, although those minutes seemed like days as I waited on the river bank.

The best value for SOS/Emergency use is a device on the proven and free governmental COSPAS/SARSAT network, such as a PLB. The downfall of this is the lack of two-way messaging.

For non-emergency communication options, we have to dive deeper into the diagram shown above. When trying a new device, I narrow the field by examining the network first rather than looking at specific devices.

The Iridium network, with its 66 satellites, is used by the InReach, Zoleo, ACR, and other brands. The GlobalStar network, with its 24 satellites, is used by Apple and Spot devices. Both networks have worked everywhere I tested them, from Montana’s Bob Marshall Wilderness to the wilds of Ohio. Messages transmit faster through Iridium’s network, and that’s due to having twice as many satellites in the sky than GlobalStar.

If my theory is correct that more satellites equal better coverage, then we’re in for quite a ride once the T-Mobile StarLink venture begins sometime in 2023.

As you can see, the world of communications is much larger than in the days of smoke signals, and there’s a lot to consider. I will leave you with this parting thought regarding devices. The initial purchase price is only one part of your decision. To find the total cost of satellite communicators, you must include activation costs and ongoing subscription plans. Once those expenses are figured in, a unit with a higher upfront cost may be cheaper over the long haul.

For the world’s largest guide to places to ride and camp, give us a visit at www.TrailMeister.com. Also, check out The ABCs of Trail Riding and Horse Camping, a book for both new and seasoned horse riders and campers.