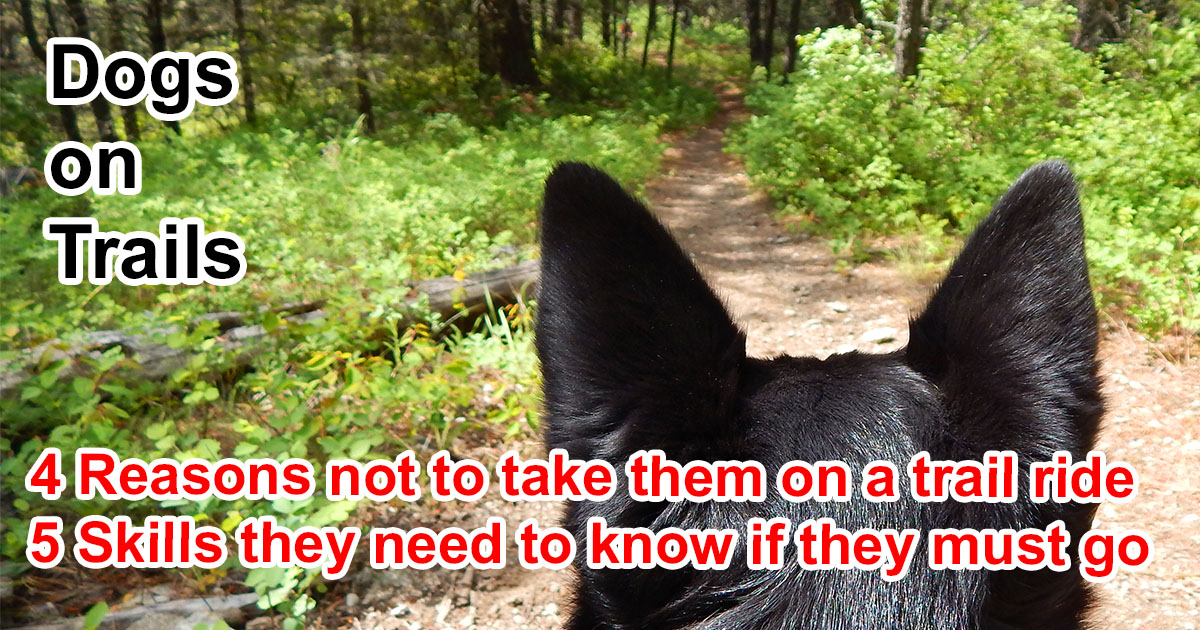 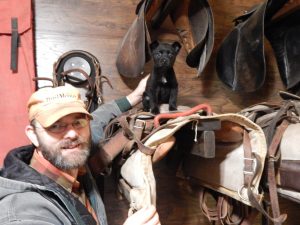 Dogs are truly man’s best friend and joy to be around. I’ve belonged to numerous canids throughout my life and I have a soft spot for these most loyal of critters. And, although I love my dogs, they don’t accompany me on trail rides nor do they venture out on wilderness trips with the horses.

Here’s the four reasons why as well as 5 things your dog should know if you do choose to take them on a trail ride.

To protect your dog from other animals

Sure, your pooch might be a descendant of the mighty wolf, but allowing them to travel the trail off-leash still poses a number of threats. One major threat is that domesticated animals are often targeted by predators. Coyotes, cougars, and others pose threats to off leash dogs. These predators are brash and often not fazed by a dog’s size.  Other less thought of, but equally real, threats include porcupines and snakes. Keeping your dog at home also helps to avoid the risk of your dog triggering a predator (think bear) while off-leash before fleeing back to you with said predator close behind.

The animals your dog may encounter don’t have to be wild to be a danger. There’s also the issue of other domestic dogs, especially poorly trained ones wandering off leash. The aftermath of two strange dogs getting into a rumble isn’t pretty. Topping the list of trail dangers are our own livestock. Untold numbers of dogs that have encountered a horse, or mule, that wasn’t keen on their attention, and suffered for it. A well-aimed kick from a 1,000 lb equine can make for a very unpleasant trip to the emergency vet.

To protect your dog from trail hazards

Every year you’ll find stories about dog rescues that could have been avoid entirely had the animal simply been kept at home or on a leash. Natural spaces pose a number of risks to our less than wilderness savvy companions, from hidden mine shafts to cliffs, getting lost, and beyond. Keeping your dog on leash helps keep them away from these hazards that their canine brain may not fully understand as they follow their nose. Other trail and wilderness hazards include various parasites including giardia and plague.

For the safety of other trail users

It seems that every dog owner thinks their dog “isn’t aggressive”. However a dog doesn’t have to be aggressive to be a problem. Many of the people that we share our trails with have well founded fears of dogs. Your pups bounding, happy, barking, greeting may well be interpreted as aggression by a stranger. There’s also the instance of dogs running loose and causing horse accidents when they spooked another rider’s horse.

For the safety of the locals

When a dog spots native wildlife, there’s a good chance they’ll want to chase it. When this happens, it stresses out the native animal, something that itself can lead to death. Your dog’s predatory behavior is normal. The chase prey drive is instinctual. The issue is that when prey animals are harassed they uses up energy they may need to survive. It’s one thing for the locals to deal with each other, it’s entirely another for us to bring our dogs into the mix and cause further problems. Loose dogs chasing wildlife is such an issue that most states have laws that penalize owners of dogs chasing wildlife.

These are the four main reasons that my dog doesn’t accompany me on trail rides. That’s not saying that he doesn’t get to go out. We go on many hikes together where he can stay safely on leash and out of mischief, or go off leash, where legal, when I can keep an eye on him without also having to control one or more horses and mules.

This isn’t to say that there aren’t dogs that are great as trail riding companions, just that there are a lot of things to consider. If you insist on bringing another furry four legger with you on the trail I would suggest that your dog have an excellent grasp of these basic commands first. 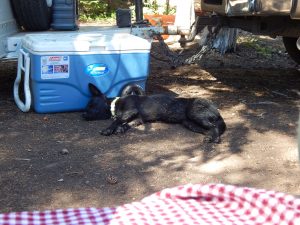 Before you go check the rules for the area that you’re riding to be sure that off leash dogs are allowed and be painfully honest about your dog’s abilities: If your dog listens to your voice only some of the time, he or she is not ready to accompany the ponies on the trails. In the decades that I’ve been trail riding I’ve only seen one dog that was worthy of the title “Trail Dog”, and he wasn’t mine. Here’s looking at you Bandit!

For more practical information on trail riding and camping with horses visit us at www.TrailMeister.com. We’re also the world’s largest guide to horse trails and camps! Until next time Happy Trails!