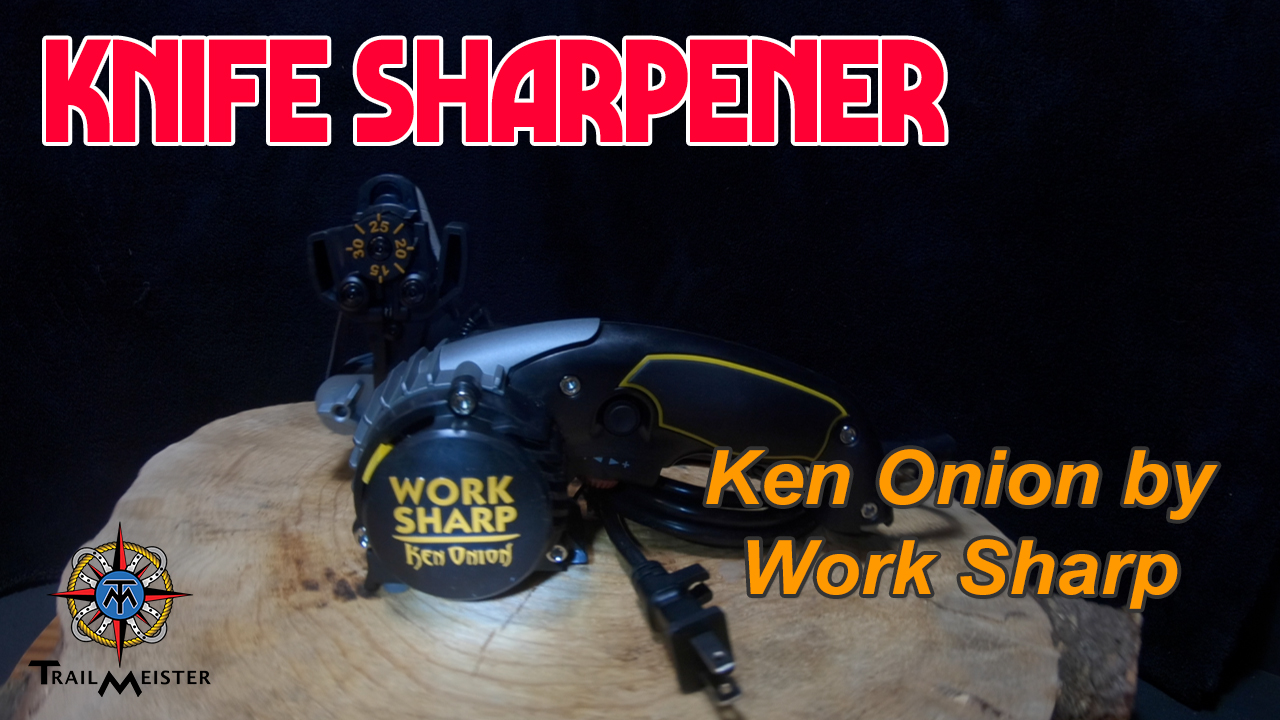 Have you ever noticed that your knife is having a harder time doing its job. You might even find your knifework is slipping—literally. And aside from being annoying to work with, a dull knife is dangerous. To keep your fingers in good shape, you’ll want to learn how sharpen your knives.

Setting up the Ken Onion Knife Sharpener is quick and easy. Just a quick matter of choosing the appropriate abrasive belt, selecting the sharpening angle, and plugging in. The belts can be easily swapped out by simply lifting the belt changing lever, sliding the belt on or off, and releasing the lever. The sharpening angle is set by turning the Angle Adjustment Knob located on the Sharpening Guide and aligning the desired angle with the indicator line at the top of the guide.

Once the angle is set and the proper belt installed, you are ready to start sharpening.

1 – Beginning with the power off, insert the blade into the right side of the Sharpening Guide at the heel of the bevel.

2 – Squeeze the Power Switch and simultaneously pull the blade through the guide at a rate of one inch per second, following the curve of the blade and keeping the edge perpendicular to the belt. Be sure to use only the weight of the blade against the belt. Do not press down into the guide.

3- Release the Power Switch and stop the pull when the tip of the blade reaches the center of the belt to avoid rounding the tip.

Repeat the process described here on the same side until you develop a burr, then repeat the same number of strokes on the other side. Once you have shaped the bevel, proceed with finer grit belts using alternating strokes.

We tested a number of different blades out on the Ken Onion Knife Sharpener. The first knives through the system were severely damaged and less favored.  I was hesitant to try the Work Sharp on my favorite blades first. It’s best to start out with some lower quality or less sentimental knives until you get comfortable with the system. I was quite impressed with how even and precise the bevel was after running the knives through the system. If you don’t use proper technique, you risk over-grinding the edge. But if you pull the blade through consistently in the manner described above, you will achieve very impressive results.

How easy is it? I sharpened every kitchen knife and utility knife in the house. The Ken Onion Knife Sharpener works quickly and produces an amazingly sharp edge, especially when you are accustomed to doing everything by hand.

AS always for more practical information on trail riding and camping with horses www.TrailMeister.com has you covered!