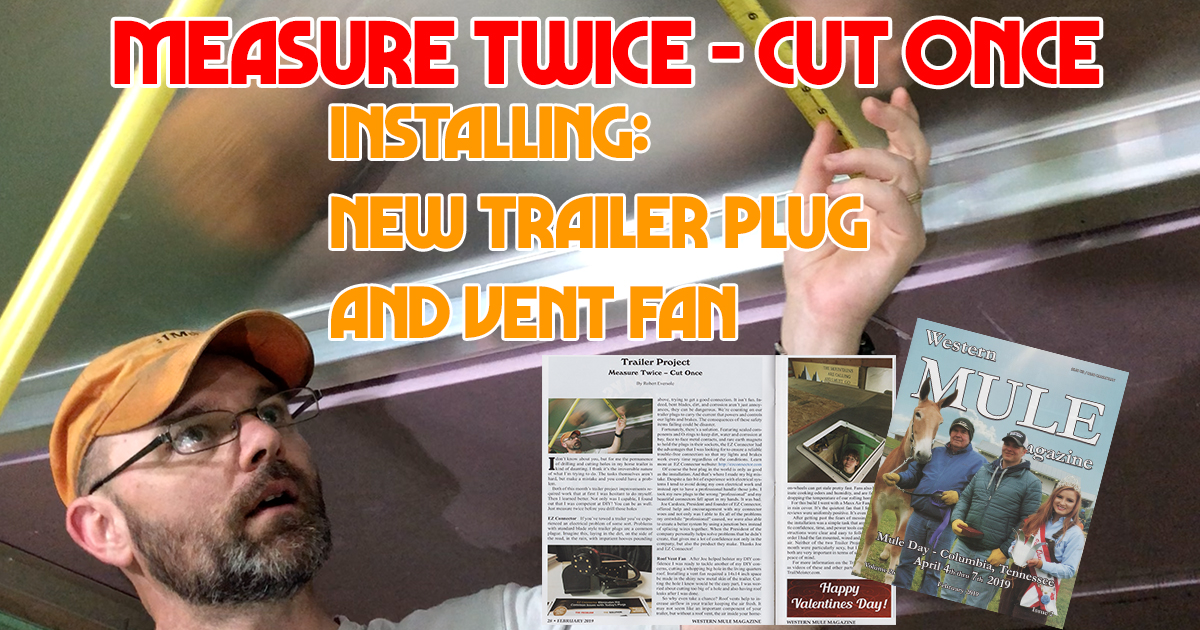 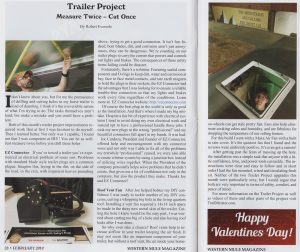 I don’t know about you, but for me the permanence of drilling and cutting holes in my horse trailer is kind of daunting. I think it’s the irreversible nature of what I’m trying to do. The tasks themselves aren’t hard, but make a mistake and you could have a problem.

Both of this month’s trailer project improvements required work that at first I was hesitant to do myself. Then I learned better. Not only was I capable, I found out that I was competent at DIY! You can be as well. Just measure twice before you drill those holes! 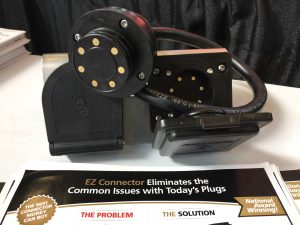 EZ Connector– If you’ve towed a trailer you’ve experienced an electrical problem of some sort. Problems with standard blade style trailer plugs are a common plague. Imagine this, laying in the dirt, on the side of the road, in the rain, with impatient hooves pounding above, trying to get a good connection. It isn’t fun. Indeed, bent blades, dirt, and corrosion, aren’t just annoyances, they can be dangerous. We’re counting on our trailer plugs to carry the current that powers and controls our lights and brakes. The consequences of these safety items failing could be disaster. 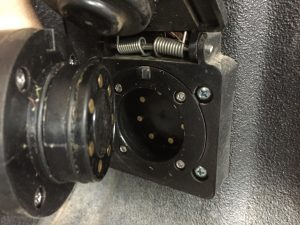 Fortunately, there’s a solution.  Featuring sealed components and O-rings to keep dirt, water, and corrosion at bay, face to face metal contacts, and rare earth magnets to hold the plugs in their sockets, the EZ Connector had the advantages that I was looking for to ensure a reliable trouble-free connection so that my lights and brakes work every time regardless of the conditions. Learn more at the EZ Connector website – http://ezconnector.com 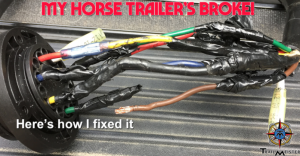 Of course the best plug in the world is only as good as the installation. And that’s where I made my big mistake. Despite a fair bit of experience with electrical systems I tend to avoid doing my own electrical work and instead opt to have a professional handle those jobs. I took my new plugs to the wrong “professional” and my beautiful connectors fell apart in my hands. It was bad. Here’s a video on what this “mechanic” did to my trailer.

Joe Cardoza, President and founder, of EZ Connector offered help and encouragement with my connector woes and not only was I able to fix all of the problems my erstwhile “professional” caused we were also able to create a better system by using a junction box instead of splicing wires together. When the President of the company personally helps solve problems that he didn’t create, that gives me a lot of confidence not only in the company, but also the product they make. Thanks Joe and EZ Connector!

For more information on EZ Connector and why you want them on your trailer here’s the link – http://ezconnector.com 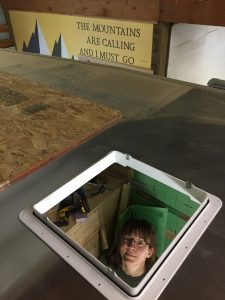 Roof Vent Fan– After Joe helped bolster my DIY confidence I was ready to tackle another of my DIY concerns – cutting a whopping big hole in the living quarters roof. Installing a vent fan required a 14×14 inch space be made in the shiny new metal skin of the trailer. Cutting the hole I knew would be the easy part, I was worried about cutting too big of a hole and also having roof leaks after I was done.

So why even take a chance? Roof vents help to increase airflow in your trailer keeping the air fresh. It may not seem like an important component of your trailer, but without a roof vent, the air inside your home-on-wheels can get stale pretty fast. Fans also help eliminate cooking odors and humidity, and are fabulous for dropping the temperature of our rolling homes.

For this build I went with a Maxx Air Fan with a built in rain cover. It’s the quietest fan that I found and the reviews were uniformly positive. It’s even got a remote!

After getting past the fears of messing up the hole, the installation was a simple task that anyone with a little confidence, time, and power tools can tackle. The instructions were clear and easy to follow and in short order the I had the fan mounted, wired and circulating fresh air.

Neither of the two Trailer Project upgrades this month were particularly sexy, but I would argue that both are very important in terms of safety, comfort, and peace of mind.

For more information on the Trailer Project as well as videos of these and other parts of the project visit TrailMeister.com