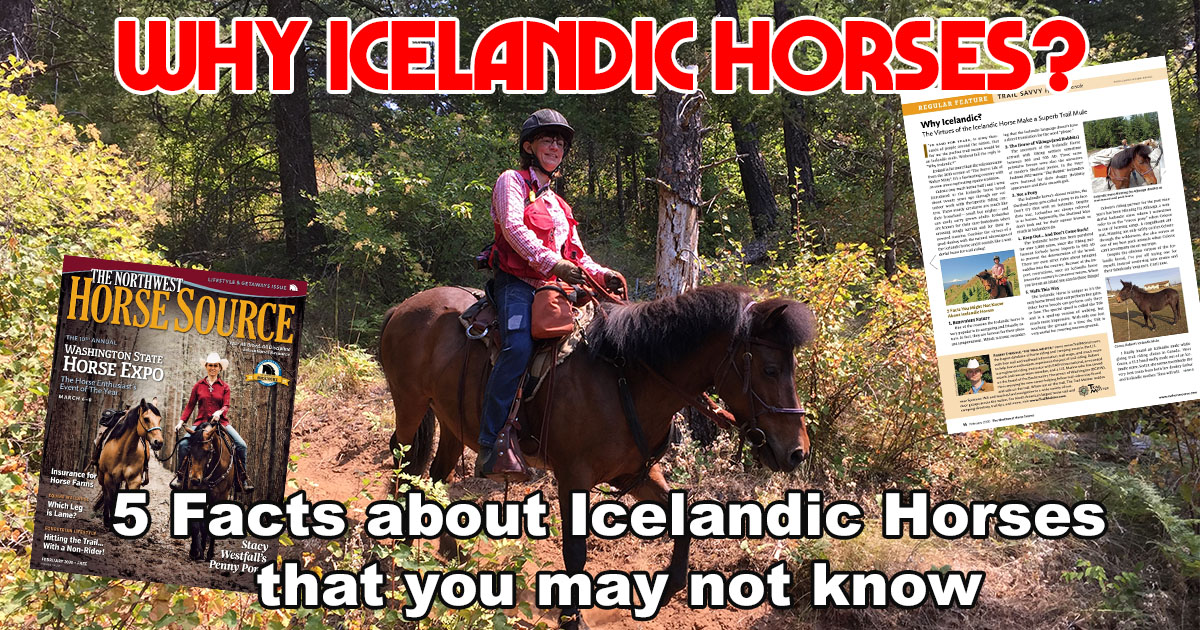 I’ve said for years, to many thousands of people around the nation, that for me the perfect trail mount would be an Icelandic Mule. Without fail the reply is “Why Icelandic horses?” 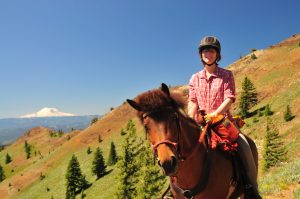 Iceland is far more than the volcano scene from the 2013 version of “The Secret Life of Walter Mitty”. It’s a fascinating country with an even more captivating equine tradition. Celeste (my MUCH better half) and I were introduced to the Icelandic breed about twenty years ago through our volunteer work with therapeutic riding centers. These sturdy creatures are much like their homeland – small but mighty – and can easily carry grown adults. Icelandics are known for their sure footed-ness when crossing rough terrain and for their renowned stamina. Combine the virtues of a good donkey with natural advantages of the Icelandic and it sounds like a wonderful beast for trail riding!

Here’s five facts about Icelandic horses that you might not know.

One of the reasons the Icelandic horse is very popular is its easy going and friendly nature. In fact, they are famous for their pleasant temperament. Which is ironic considering that the Icelandic language doesn’t have a direct translation for “please.”

The ancestors of the Icelandic Horse arrived with Viking settlers sometime between 860 and 935 AD. These same primitive horses were also the ancestors of modern Shetland ponies. In the Peter Jackson 2012 movie “The Hobbit” Icelandics were featured for their shaggy hobbitty appearance and their smooth gait.

Although the Icelandic horse’s closest relative, the Shetland pony, gets called a pony to its face. Don’t try that with an Icelandic. Despite their size Icelandic’s are always referred to as horses. Apparently, the Shetland Isles don’t look out for their equine friends as much as Icelanders do.

The Icelandic horse has been purebred for over 1,000 years, since the Viking parliament forbade horse imports in 982 AD to prevent the deterioration of the breed. There are even strict rules about bringing saddles into the country. Because of the import restrictions once an Icelandic horse leaves the country it can never return. When you live on an island you can do these things!

The Icelandic Horse is unique as it is the only horse breed that can perform five gaits while other horse breeds can only perform three or four. The special speed is called the Tölt and is a sped up version of walking, but much more impressive. With only one foot touching the ground at a time the Tölt is very useful for covering uneven ground. 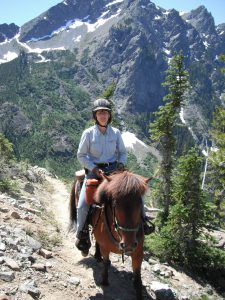 Celeste’s riding partner for the past nine years has been Minning fra Alfasaga, a wonderful Icelandic mare whom I sometimes refer to as the “circus pony” when Celeste is out of hearing range. A magnificent animal, Minning not only safely carries Celeste through the wilderness, she also serves as one of my best pack animals when Celeste can’t accompany me on my trips.

Despite the obvious virtues of the Icelandic breed I’ve put off trying one for myself, instead venturing into mules and their fabulously long ears. Until now. 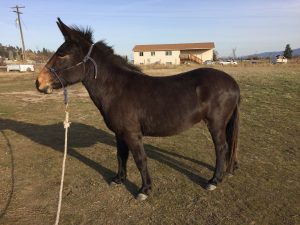 I finally found an Icelandic mule while leading trail riding clinics in Canada. Meet Cocoa. Cocoa is a 13.1 hand molly mule out of an Icelandic mare. So far she seems to embody the very best traits from both her donkey father and Icelandic mother. Time will tell.

For more information on trail riding and horse camping visit www.TrailMeister.com – The largest guide to horse trails and camps!