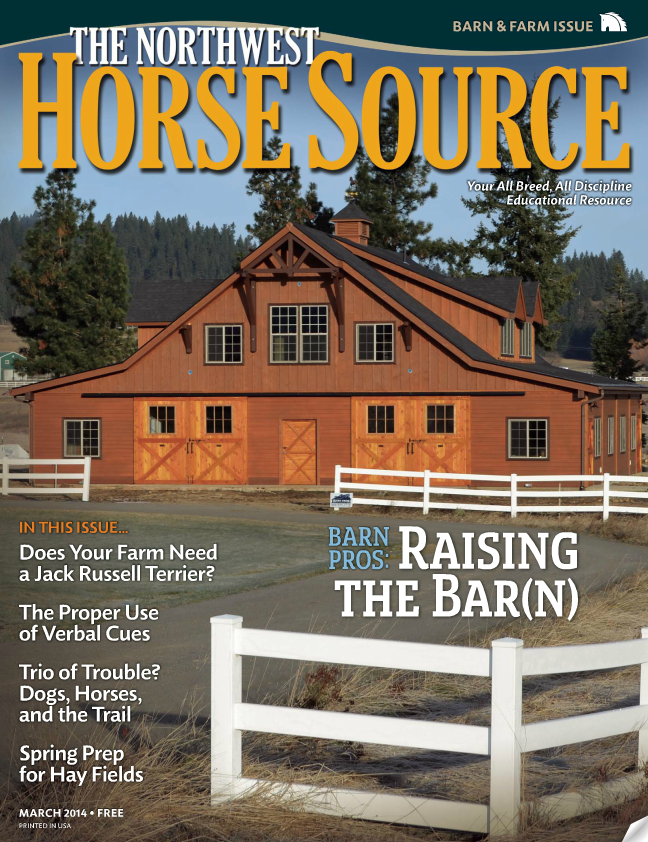 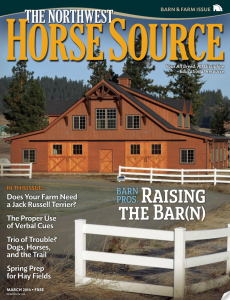 Roy Rogers had Bullet, Big Jake had Dog, Jake Lonergan had Dart, and I have Abby. Not only are dogs faithful companions to movie cowboys, and me, they’re also trail pals for many of us. With 70 million dogs in America chances are that we’re going to encounter a dog on the trail at some point; yours, a friend’s, or a stranger’s. How you handle that situation may decide whether you walk or ride home.
Not only is horse riding a great activity, so is the idea of bringing dogs along on the trail. For 36% of Americans a dog is a family member and as much a part of the ride as any other member of the group. However, accompanying trail riders offers special challenges for dogs, horses and their riders. And not all canines, equines or humans, are up to the task. 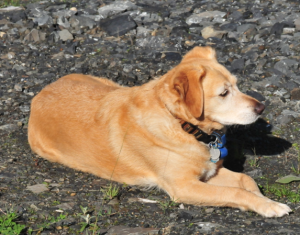 The biggest thing a dog needs to master before he’ll be welcome on the trail is to stay with his people. A dog that roams too far ahead or wanders off can turn a very enjoyable ride into tragedy if you and he get separated. Urban dogs generally have as much wilderness savvy as their owner; which is to say not much. The various creatures that call the forest home are smart, hungry, and know an easy meal when they see it. For your dog’s sake he needs to learn to ignore all of the tempting distractions such as hikers, bicyclists, and wildlife and stay nearby. No one wants to be the person posting a lost dog notice at the trailhead. Unfortunately it happens all too often.Before heading out with Fido your mount should also be prepared. Hopefully your horse is used to your dog and won’t kick when the dog is following behind. She’ll also need to be calm enough to deal with a variety of different situations such as a dog running underneath or suddenly appearing out of the brush. If your trail mount is a trail novice or high strung adding a dog to the mix may be too much to ask without significant additional training before the three of you hit the trails together. 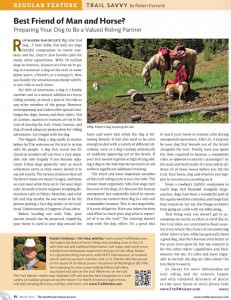 The third and most important part of this trail riding menagerie is you, the rider. The reason most organized rides ban dogs isn’t because of the dogs, it’s because the human component has failed in their obligation to ensure that they can control their dog in a safe and responsible manner. Have you taken the time and effort to teach your dog what is expected of it on the trail? The training doesn’t stop with the dog either. It’s a great idea to teach your horse to remain calm during unexpected encounters. After all it may not be your dog that bounds out of the brush alongside the trail. And finally have you spent the time required to become a competent rider as opposed to merely a passenger? As the pack and herd leader it’s your job to address all of these issues before you hit the trail.

From a cowboy’s faithful companion to coach dogs that bounded alongside stagecoaches, dogs have been a wonderful part of the equine world for centuries and I hope that they remain so. For me few things are better than going on a ride with my Abby along. That being said she doesn’t get to accompany me nearly as often as she’d like to. Her trail rides are restricted to front country areas where the chance of encountering other riders is low. Abby has generally been a good dog, and she’s become even better as the years have gone by, but my concern is for the other riders’ capabilities and their mounts. For me it’s safer and more enjoyable to include my dog on rides where my worry factor can stay low.