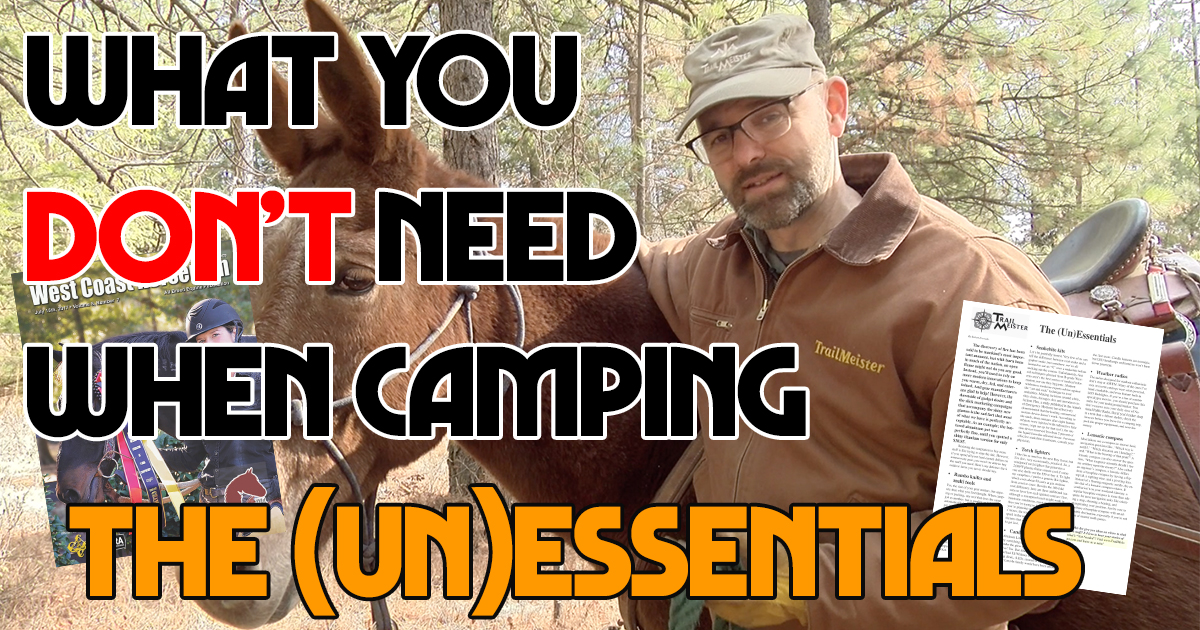 The (Un)Essentials. What You Don’t Need When Camping

The discovery of fire has been said to be mankind’s most important moment, but with burn bans in much of the nation, an open flame might not do you any good. Instead, you’ll need to rely on more modern innovations to keep you warm, dry, fed, and entertained. And gear manufacturers are glad to help! However, the downside of gadget desire and the slick marketing campaigns that accompany the shiny new gizmos is the sad fact that most of what we have is perfectly acceptable. As an example; the battered aluminum pot was perfectly fine until you spotted a shiny titanium version for only $88.85.

Resisting the temptation to buy more stuff is like trying to stop the daily tide. However, if you spend all your hard-earned dollars on unnecessary gear, you won’t be able to buy the stuff you really need. Here’s 6 outdoor items you really don’t need for camping.

Yes, the size of your gear matters, but opposite than what you first thought. When camping or packing, any tool that does the same job as another—but is smaller or lighter—is automatically better. Because of their “bigger is better” attitude, knives and multi-tools often add unnecessary ounces. Here’s a simple rule. If your knife could be used in combat, it’s too big. Likewise, if your multi-tool has more than one cutting blade, a metal file, or weighs more than five ounces, it’s better suited for your glove compartment than your saddle bag. Honestly who needs a “Mother of All” Swiss Army knives, featuring 87 tools and weighing almost three pounds. Despite its indisputable coolness, it won’t fit in your pocket.

Let’s be painfully honest. Very few of us can tell the difference between a rat snake and a gopher snake, but somehow, we’ve all learned to cut an “X” over a snakebite before sucking out the venom. Unfortunately, first aid techniques gleaned from B-grade Westerns aren’t the best source of medical information, nor are they hygienic. Modern wilderness medicine experts advise against the “cut and suck” technique to treat snakebites. Making incisions around a bite, they claim, damages skin and introduces infection. Plus, a study published in the Annals of Emergency Medicine has effectively demonstrated that the leading commercial suction device doesn’t work. According to the study, three minutes after eight human subjects were injected with radioactive fake venom (sign me up for that test!), the suction device removed less than 2 percent of the liquid from the affected tissue. For more effective snakebite treatments, talk with your doctor.

I like fire as much as the next Boy Scout. But I’m also, very occasionally, practical. So, a windproof torch lighter that generates a 2,000°F plasma flame sounds cool, if someone else shells out the $50 to buy it. To light my campfires I prefer a generic Bic lighter, which costs about 50 cents at gas stations from coast to coast. Besides the 100-fold cost difference, here are three additional reasons to favor low-tech ignition sources. First, although a stormproof torch might work in hurricane conditions, most of the stoves or fires you’re trying to light wont. So, unless you’re planning on crème brulée instead of s’mores, the torch lighter will be a lonely spark in the squall. Secondly, Murphy’s Law dictates that small expensive gear is the first to get lost.

Abraham Lincoln learned to read and write by scratching the alphabet on hickory bark under the glow of a tallow candle. Impressive? Yes. But Abe was a smart young man, and had Eli Whitney invented the light-emitting diode (LED) instead of the cotton gin, the Lincoln family would have been among the first users. Candle lanterns are nostalgic, but LED headlamps and lanterns won’t burn down your tent.

The radios designed for outdoor enthusiasts don’t stop at AM/FM. Many of the ones I’ve seen in recent catalogs were solar-powered, hand-crankable, and even feature built-in LED flashlights. If you’re a fan of zombie apocalypse movies, you should purchase this radio for your underground bunker. You don’t want to miss your daily dose of National Public Radio. But if you’d rather sleep in a tent than a fallout shelter, check the forecast before you leave for a camping trip, pack the proper equipment, and save the money.

Most hikers use a compass to answer basic navigation questions like “Which way is north?” “Which direction am I heading?” and “What is the bearing of that peak?” A lensatic compass can also answer the question: “At what magnetic azimuth should I fire my artillery upon the enemy?” Also called an engineer’s compass a lensatic differs from a baseplate compass by having a flip-top lid, a sighting wire, and a pivoting lens. Instead of a floating magnetic needle, the entire dial of a lensatic compass rotates. If combat isn’t on your weekend itinerary, a regular baseplate compass is more than adequate for most navigation tasks like orienting a map, shooting a bearing, and triangulating your position. Just be sure to purchase a baseplate compass with an adjustable declination, especially if you’re not a fan of mental math games.

Did this list give you ideas on where to shed extra stuff? I’d love to hear your stories of what you don’t need when camping. Visit www.TrailMeister.com and leave us a note!