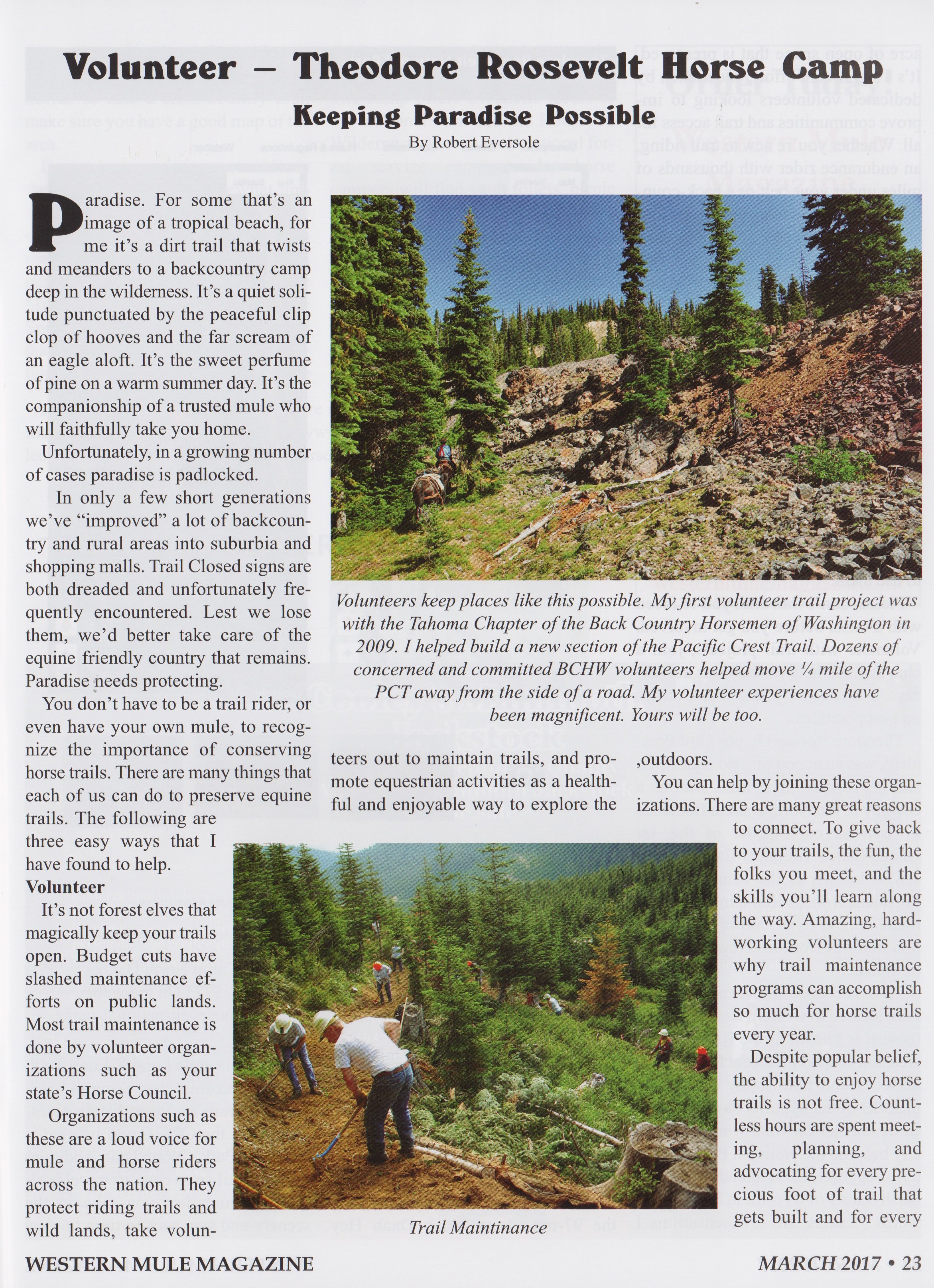 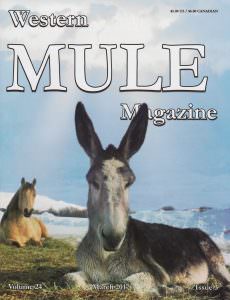 Paradise. For some that’s an image of a tropical beach, for me it’s a dirt trail that twists and meanders to a backcountry camp deep in the wilderness. It’s a quiet solitude punctuated by the peaceful clip clop of hooves and the far scream of an eagle aloft. It’s the sweet perfume of pine on a warm summer day. It’s the companionship of a trusted mule who will faithfully take you home.

Unfortunately, in a growing number of cases paradise is padlocked.

In only a few short generations we’ve “improved” a lot of backcountry and rural areas into suburbia and shopping malls. Trail Closed signs are both dreaded and unfortunately frequently encountered. Least we lose them, we’d better take care of the equine friendly country that remains.  Paradise needs protecting.

You don’t have to be a trail rider, or even have your own mule, to recognize the importance of conserving horse trails. There are many things that each of us can do to preserve equine trails. The following are three easy ways that I have found
to help.

It’s not forest elves that magically keep your trails open. Budget cuts have slashed maintenance efforts on public lands. Most trail maintenance is done by volunteer organizations such as your state’s Horse Council.

Organizations such as these are a loud voice for mule and horse riders across the nation. They protect riding trails and wild lands, take volunteers out to maintain trails, and promote equestrian activities as a healthful and enjoyable way to explore the outdoors.

You can help by joining these organizations. There are many great reasons to connect. To give back to your trails; the fun, the folks you meet, and the skills you’ll learn along the way. Amazing, hard-working volunteers are why trail maintenance programs can accomplish so much for horse trails every year.

My first volunteer trail project was with the Tahoma Chapter of the Back Country Horsemen of Washington in 2009. I helped build a new section of the Pacific Crest Trail. Dozens of concerned and committed BCHW volunteers helped move ¼ mile of the PCT away from the side of a road. My volunteer experiences have been magnificent. Yours will be too.

Despite popular belief, the ability to enjoy horse trails is not free. Countless hours are spent meeting, planning, and advocating for every precious foot of trail that gets built and for every acre of open space that is preserved. It’s a significant effort, undertaken by dedicated volunteers looking to improve communities and trail access for all. Whether you’re new to trail riding, an endurance rider with thousands of miles under your belt or a back-country packer, one thing is unquestionable: none of these trails would exist if it weren’t for volunteer groups that actively advocate for your right to ride them.

We live during a time when equine trail use is being curtailed. Most Americans live in urban settings, removed from our version of paradise. Most of them don’t understand the importance of conservation, outdoor recreation, and the protection of trails.

Riders like you and I need to protect and ensure the future of horse trails. We can’t assume that these trails will remain available whenever we choose to use them.

Please, don’t wait until you’re faced with a crisis before you get involved. Volunteer with trail projects, join a club that will help protect your trail access, and educate yourself and others on best practices. 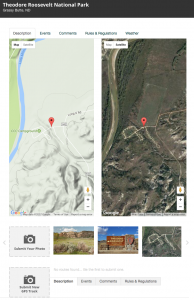 Theodore Roosevelt, our 23rd President, was an accomplished equestrian and his resume

included a stint as a cowboy in the North Dakota Badlands as well as commander of the 1st United States Volunteer Cavalry, otherwise known as the Rough Riders. President Roosevelt’s namesake National Park is as distant in attitude as it is in miles from his New York City birthplace.

The Theodore Roosevelt National Park located in western North Dakota, in what is known as the Badlands, an area that shaped President Roosevelt’s attitudes and philosophy for the remainder of his life after having been a cattle rancher on what would eventually become the National Park. As the term suggests, the Badlands possess a harsh beauty of its own. In Roosevelt’s words “…there are few sensations I prefer to that of galloping over these rolling limitless prairie, … or winding my way among the barren, fantastic and grimly picturesque deserts of the so-called Bad Lands… ” The trails in the Park and the surrounding Dakota Prairie National Grasslands include the 97-mile long Maah Daah Hey Trail, the six-mile Long X Loop Trail, and the four-mile long Summit Trail. All these trails are immediately accessible from the CCC Camp in what is called the Park’s North Unit. Additionally, off trail cross country travel is allowed, which lets you take in the scenery and step back in time to view the park as it existed for millennia (prior to asphalt roads). Should you decide to take a cross-country tour, make sure you have a good map of the area.

Equestrian camping opportunities in the National Park are some-what limited. The nearest equestrian friendly camping area in the North Unit is in the CCC Campground, a national grasslands camp just across the Li le Missouri River from the Park. e South Unit has a group campground that allows horse camping by reservation only. As the name suggests, the CCC Campground was built by the Civilian Conservation Corps in 1934. The camp offers excellent access to the National Park and the Roosevelt Wilderness. As with most national forest service campgrounds, horse campers will find vault toilets, picnic tables, potable water and hitching rails for stock use. Whether you ride briskly through the Badlands or relax at camp in the shade of a cottonwood tree, you’ll have a memorable time here at the Park that registered deep in Roosevelt’s heart.